0
by Sonny Thomas in

Congratulations to the SGOCT MMVS quiz team on securing the first place (shared with St. Gregorios Orthodox Church Jackson Heights, NY) in the quiz competition held at the diocesan level. The quiz was held virtually on October 3rd and the results were announced in the annual conference on October 10th. There were 30 teams in the quiz competition. Jessie Vaidhyan, Siju Varghese, Beena Mathew, Santy Thomas & Jaya Mary Soney were the participants from our parish. 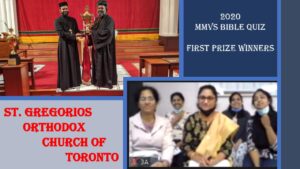 The Canada Region MMVS presented a recorded skit in the North American Diocese annual MMVS conference. The skit was based on the life of Deborah. It was recorded in our church basement and was well appreciated. Our MMVS team participated in the skit along with other MMVS teams from sister orthodox churches in the Greater Toronto area. Congratulations to the proud winners of our parish MMVS members for getting first prize in the North East American Diocese Quiz Competition.