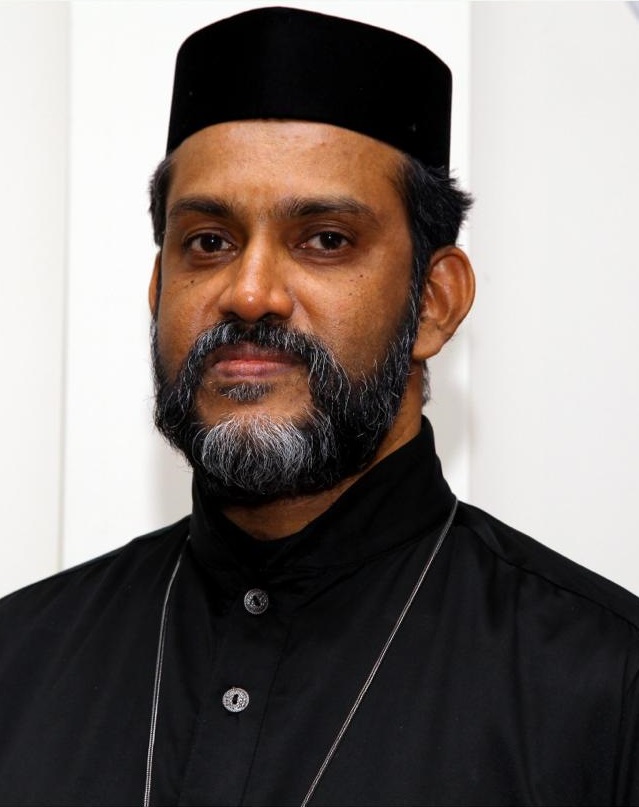 Fr Thomas Pallithekkathil John, Abby villa, South Monkuzhy, Pullikanakku P O, Kayamkulam, Alapuzha District, Kerala, India – 690 537 has been serving at various parishes in various Dioceses ( Kollam, Mavelikara, UK-Europe-Africa) of the Malankara Orthodox Church since 2000. His serving at the Altar began in 1982 at the age of 15 through laying of hands by late Rev Fr K J Koshy, the then vicar of his home parish at St George OSC South Monkuzhy. This ordination reconfirmed by HG Mathews Mar Epiphanios Metropolitan of Kollam. He was ordained a Sub Deacon (Yaupadiyakno) in 1998 jointly by His Holiness Baselios Mar Thoma Mathews II assisted by HG Mathews Mar Epiphanios Metropolitan and HG Zachariah Mar Anthonios. His Deacon (Samsono) ordination was held at Pazhaya Seminary Chapel Kottayam along with 14 other sub-deacons in 1998 prior to the Consecration of Holy Myron (Mooron Koodasa) where HH Baselios Marthoma Mathews II laid the hands. He had the blessed privilege to assist the Mooron Koodasa lead by HH Baselios Marthoma Mathews II and all Bishops, assisted by 12 Priests and 12 Deacons held at Devalokam Araman Chapel in 1998 March. He was called to priesthood with laying of hands by HH Baselios Marthoma Mathews II assisted by HG Mathews Mar Epiphanios and HG Zachariah Mar Anthonios Metropolitans on Friday 09 June 2000 at his home parish.

Vicar’s Family
Fr Thomas John is the eldest son of Mr. P G John, who was a teacher at Kadampanad Adoor and later served at NRPM High School Pullukulangara Kayamkulam till his retirement. He briefly worked in Abu Dhabi, from 1979 till 1994, when he eventually resumed his service at NRPMHS. His mother Molly John was from Theckedathu Pallickal family at Puthencavu Chengannur. His beloved mother passed away in 2011 February.Fr Thomas John has a younger brother named Binu John. His brother has been working in Abu Dhabi UAE with his family.

Education History
CORE PROFESSIONAL EDUCATION AND TRAINING
Fr Thomas P John had his secular schooling, pre-university and graduation from various schools and colleges in Kerala. After graduating, he had Theological graduation at Orthodox Theological Seminary affiliated to the University of Serampore, also secured a Post Graduate Diploma from Orthodox Theological Seminary Kottayam under Federated Faculty and Research Centre of the Senate of Serampore.

EMPLOYMENT HISTORY
Director & Chaplain at Paulose Mar Pachomios Shalem Bhavan Psycho Social Rehabilitation Centre, Arunoottimangalam, Mavelikara, Kerala, India – 690 537
Reg No 123/18/PRC of the Dept of Social Justice Kerala, No 1553 of the Kerala Board of Control of Orphanages and Care Homes, Reg No ALP/TC/548/2016 of Charitable Societies Kerala, managed by the Diocese of Mavelikara of the Malankara (Indian) Orthodox Church. Shalem Bhavan has currently about 90 residents of age ranging from 20 to 90 years with various psychiatric conditions.
Period of Work : January 2016 – November 2019

While serving the London Parish, he was also the Ambassador and had represented the parish community in various ecclesial and secular forums, namely Churches Together in England (CTE), Churches Together in Briton and Ireland (CTBI), Catholic and Oriental Orthodox Churches (COOC), Oriental Orthodox Churches Forum, Brockley Society ( Local Neighbourhood Charity) and Interparliamentary Assembly on Orthodoxy (IAO).

He had also served the Secretary of the Diocese of UK-Europe-Africa from 2013-2015, Vice President of Orthodox Youth Movement UK from 2012-2015, Convenor of Orthodox UK Diocese Annual Family Conference 2014 and Publisher of Harmony Online Newsletter of the Indian Orthodox Diocese UK.

Vicar at St. Gregorios Orthodox Church, Punnamoodu Mavelikara, Alappuzha, Kerala
Period of work : October 2006 – May 2011
During his tenure, he had lead the construction work of the new church building which had completed and consecrated in January 2011. This parish is the first church dedicated to St Gregorios of Parumala before his canonisation as the first saint of Malankara.

Hobbies
Fr Thomas John has an interest in reading books and articles, enjoys writing and is fond of music. He has special interest in Charity works and is open to all religious/secular ideologies and various schools of thoughts.